skip to main | skip to sidebar

Some quotes from an article discussing the influence of social media (in this case, Twitter) during the crisis in Thailand. It's not all good -- the medium was used for propaganda as well as for useful information, but it appears that the truth did rise to the surface.

...Some say Twitter – or rather its users – may have even saved lives as fighting consumed the streets of Bangkok

....With many websites censored and Thailand’s traditional media deeply divided into pro- and anti-government camps, it arguably became the only forum where you could get a clear picture of what was really going on

....“The propaganda is not good, but because of the speed, people can check and cross-check. If you put something out there that’s untrue, within 30 minutes the truth will come out because people will show evidence, photos and videos.” 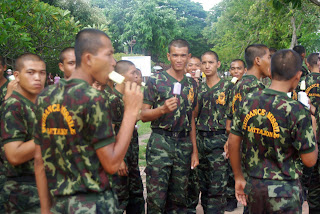 And the above photo is my personal memory of Thai soldiers in 2008. Sad to think of what they might be doing now. I shot this picture in the old capitol (Ayutthaya) where, with the most generous family of a student we had as a homestay, we visited ancient temples, rode elephants and loved what was at that time a peaceful, beautiful, busy and diverse country.
Posted by Elizabeth Wellburn at 7:32 AM 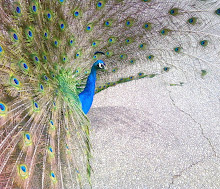 This meta-blog "follows" all the ISWO blogs so you can use this as a starting point to keep up with what's going on in the ISWO course.

Link to postings in the "ISWO Blog List" below.

Archive of this "meta" blog

This link is a posting from the point of view of a blog reader in a Blog called "DailyBlogTips":

What do you think YOUR readers want to spend their time on?


And the reason we blog from Seth Godin:
http://sethgodin.typepad.com/seths_blog/2010/04/quid-pro-quo.html